Scared? Me too. I’m sure this will sound ignorant to many and it being a free country and all, for now, I couldn’t care less what people think about my voting strategy.

My years of school have taught me that people pretty much vote for their party vs which candidate is best qualified. It makes sense. You want someone who shares your beliefs and ideals… even if the presidential hopeful has a lot to be desired.

I have tended to vote democrat, almost every election. Most of the time, I even liked who I was voting for! This election is different…

There has been so much noise. Name calling, mud slinging, accusations… it has really given me a good look at the people behind the campaign.

I am generally not a dismissive person. I don’t like generalizing and when I hear people say things like “anyone voting for Hillary Clinton doesn’t have a brain in their head”… all I can think is, I feel the same about anyone voting for Donald Trump.

I understand the people who feel like the have to vote Trump. To them, the lesser of two evils. What I can’t wrap my head around is the people who are excited for Trump. Who truly believe he will make the country “great again”.

Issues aside? The man is despicable. I cannot fathom a better, more suited word. Maybe incompetent, egomaniac, degrading… you get the picture. Without taking any of the political issues into consideration, this “man”, is a tantrum throwing, two year old toddler, at best.

Data is not complete on immigrants and crime, though many studies show there is no evidence that more crime is committed by immigrants versus the native people in this country.

He has accused Hispanic U.S. District Judge Gonzalo Curiel, of being “biased because he’s Mexican”. Judge Curiel is charged with presiding over two cases involving Trump university and fraud.

He is painfully uneducated when it comes to Islam, glaringly so, when he made the remark of the parents who lost a son in battle, “His wife, if you look at his wife, she was standing there. She had nothing to say. She probably, maybe she wasn’t allowed to have anything to say,” he said. “You tell me, but plenty of people have written that. She was extremely quiet and it looked like she had nothing to say.” You know, because grieving parents are all about wanting to become blubbering messes on camera- right?

He claims to be in good “with the blacks”. A statement in part, reads “A well-educated black has a tremendous advantage over a well-educated white in terms of the job market. I think sometimes a black may think they don’t have an advantage or this and that… I’ve said on one occasion, even about myself, if I were starting off today, I would love to be a well-educated black, because I believe they do have an actual advantage.’’ It’s true that this is an old quote. I imagine he’d be dead by now, had he said it during this campaign with the “Black Lives Matter” and police brutality issue that has become increasingly more prominent yet, I think that’s just it. It hasn’t necessarily gotten worse, only more visible. So to suggest at any time in history, one would be better off as a black man… to me sounds too ignorant to comprehend.

A lot of women are pigs. However, when you see one you want, you can just “grab them by the pussy”.

Fine qualities for any future president, don’t you think?

Another charming habit Trump has is the ability to quickly identify and alert everyone to any lies by simply stating “WRONG”. I think someone forgot how to take turns when speaking…

Minimizing is another thing his is quite masterful at, reminding everyone (3 times in one debate!) that his comments about his own sexually abusive BEHAVIORS were merely “locker room banter”. Do S&M dungeons have locker rooms now? He said it was 11 years ago that happened, lets move on… if you weren’t obviously the same sack of shit you were when that was recorded? Maybe. You are still the same gross, objectifying “man” today that you were back in that “locker room”.

I wondered what Melania Trump thought of her husband’s little pickle (sorry, pun intended, “believe me”) and was disappointed to hear her blame Billy Bush for “egging Don on”. Really? I’m supposed to believe that Donald Trump is an all powerful force to be reckoned with and he’s got his wife defending “grabbing pussy”?

The accusations of sexual assault are mounting and his defense ranges from “complete fabrications” to “I’ve heard worse from Bill Clinton” to “like she’s never had that happen before”.

His social life leave much to be desired as well… on the same scale of name calling is the petty tweets at 3:00 am.

Not to mention, he is encouraging people to BREAK THE LAW. “Vote twice” he spews. To counteract the “rigged election”. The only one rigging the election are the people in the Trump camp! There was a story the other day about Trumps supporters dressing up as poll workers to intimidate anyone not of like mind. There was a Trump/Pence sign in front of the polling station that had razor blades attached to it, so when some poor guy just doing his job tried to remove it, he sliced his fingers. Sounds like an upstanding citizen if I ever heard one…

I don’t know much about why people hate Hillary Clinton. Most of what I hear revolves around emails and taking bribes.

I’ve seen her, stand in the front lines, facing people who hate her, while they are exposing their disgust and she listens. She doesn’t run away and cry. (Sorry guys, there goes your theory of a woman pushing the button because she’s on her period…) She doesn’t lash out and blame others…

So is this it? A candidate who has an email server issue and takes bribes (allegedly) or a self centered, ignorant, violence inciting, law breaking advocate, lie spewing, too sensitive when it comes to taking it, orange oompa loompa reject? 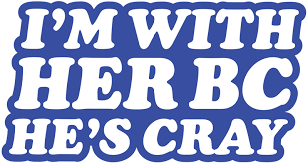 I am what a majority of the general population would call "crazy" and at this point in my life, I wear that label with love. I am a lifelong circus act. I'm focusing on balance while learning to juggle. I write about deeply overwhelming emotions like grief and I also go out and perform stand up comedy. I am a constant work in progress, as we all are. So, join me on my journey if you'd like but respect is a must. Otherwise I'll have my elephant crush you in the center ring, under the Big Top. :) Seriously, who needs that negative shit in their life? Namaste. View more posts

2 thoughts on “I Don’t Care About The Issues & I’m Still Voting!”